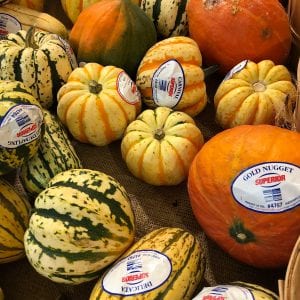 Assortment of fall pumpkins and squashes

Too late. Whoops! Temps drop, booties come out…cinnamon and nutmeg can’t be far behind. Oh, lets be real, Pumpkin Spice came back around while we were still in jorts and flip flops! Embrace it. It’s a good thing. French toast gets a bad rap for being indulgent- but it’s actually a healthy balance of carbs and protein unless you drown it in syrup or fry it in butter. Kind of like putting an egg white on toast…and why not give it a seasonal twist? Cinnamon has antioxidant powers!

Inspiration: I woke up last Saturday craving French toast, so decided to give it the Instant Pot go. I threw in some blackberries and vanilla protein powder, and topped it with Greek yogurt and Thai basil. (I’m just now realizing just how multicultural that dish came out!) It was delish, and it got me thinking about making something for the weekdays- single serve French toast minis!

The first try, I baked these in ramekins (they exploded in the best way) and added a little protein powder boost. I used PEScience Protein 4 Oats, which is formulated to add to oatmeal. The Maple Brown Sugar flavor is perfect for this recipe! I used eggbeaters to keep the calorie and fat content down, but you can use whole eggs if you prefer. I tried it both with Pumpkin Spiced English Muffins and Arnold’s Italian bread. The English muffins were too dense, but the Italian bread created a super fluffy texture! They were good… but I can do better 😉

Measuring out ingredients in my mixing bowl. I hit “tare” on my scale between each ingredient so I don’t have to mess up multiple bowls.

The first go ’round I relied on the Pumpkin Spice seasoning for flavor, and then got thinking I could bump up the nutrition content by using ACTUAL PUMPKIN. (ok, I really just forgot to get pumpkin at the store the first time) In the words of food blogger superstar, Nikki Miller-Ka, “I’m 100% convinced y’all don’t actually like pumpkin. You like cinnamon, nutmeg, mace, ginger, allspice and cloves mixed together.” Ha. With that thought in the back of my mind, I had myself a little experiment. (This is what happens when and INFP bakes. We hole up in the kitchen and try out ALL the variables) I roasted Pumpkin, Delicata squash, and Golden Nugget squash, and it turns out Nikki is right- pumpkin is bitter. Golden Nugget Squash, on the other hand, is delicious and tastes like you think pumpkin does. In the mix it goes.

One more small tweak, I subbed out sourdough bread for the other two options. Sourdough really is the king of French toast, and it brings a touch more protein with it. I really do like both versions, the Italian and Sourdough. Sourdough will produce a more dense, springy casserole, while the Italian bread creates a softer, fluffier version. Either one is a great choice, but for these, since I want to be able to grab them in the morning, I chose the more dense of the two. 248 calories, 28g carbs, 4g fat, and 26g of protein. That’s a solid start to your day! 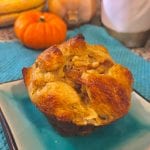 Tired of eggs for breakfast? These individual French toast casserole minis are perfect for a quick & healthy grab and go breakfast. I've added a protein boost with PEScience Protein 4 Oats whey/casein blend. It's designed for oatmeal, but I borrowed the flavor for this fall treat! Bake ahead and re-heat in the microwave or toaster.

I offer customized personal training and health coaching that will pave the way to your health and wellness goals. Reach out to me at Elevate Strong today!